You are here: Home » Kitchen » Aga Cookers » Britain Is Baking – More Than We Did Last Year!

Britain Is Baking – More Than We Did Last Year! 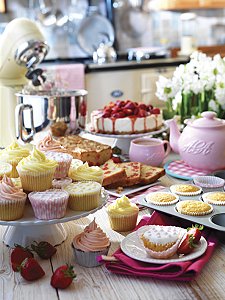 Latest research from AGA Rangemaster reveals that we are baking more than we did this time last year.

And a huge rise in the sales of bakeware, shows the most popular cake this Christmas is not a traditional cake or pudding, but the mini-muffin.

AGA Rangemaster’s Great British Kitchen survey, reveals that over a third of Britons (36%) are baking more than they did a year ago.

In the first week of December, AGA Cookshop saw a massive 110% increase in sales of mini muffin tins compared to the same week last year

Author, AGA doyenne and baking expert Mary Berry isn’t surprised, saying “mini muffins are so much more practical than the huge American version, which are definitely too much to eat in one go. It’s very important to get the young baking and making smaller versions of tea-time favourites is a great way to get them excited.”

Mary Berry adds: “Baking is huge fun and offers a real sense of well being and achievement and, of course, home-baked treats are delicious. It’s so welcoming for children when they come home from school and are given something home-baked for tea.

Cooking is shown to be at the very heart of a family home – the survey revealed that 44% of British cooks learned from their parents, whereas only 6% learned at school and 6% from packet instructions

We are also embracing technology when it comes to finding new recipes – two thirds of us use recipes we have found online, one in seven have used a food blog and one in 12 have downloaded a recipe app to a mobile phone