Bethan Gray has announced the creation of a new compilation of marble and stone tables, in cooperation with Lapicida, the world-famous stone specialist.

The Herringbone table in our picture, presents a unique zig-zag pattern across the whole of the table top, flawlessly uniting two marbles, black Nero Marquina and white Carrara.

Bethan was inspired by the impressive black and white stone arrangement, seen in iconic buildings around Europe – from the 9th century Italian Amalfi Cathedral, to the 20th century San Giovanni Battista to be found in Mogno, Switzerland.

Bethan Gray’s original version of the Brogue, was creted in the shape of an elegant leather covered solid wood table, with complex brogue detail and stitched using wax thread along the edge. 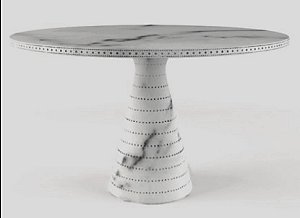 The Lapicida Version Of The Brogue Table

The Brogue and Herringbone tables are produced in Lapicida’s Harrogate workshops, using the most sophisticated stone shaping mill and the latest modern scanning technology. The finishing process is then completed by hand in the traditional way.

Bethan takes inspiration from many sources, from everyday objects, to more curious objects and structures, found when travelling the world.

The Bethan Gray Lapicida collaboration is to be exhibited exclusively at Inside Design on 26th April.

For further information about Bethan Gray at Inside Design visit the website.